The province of Almeria is very famous because of “tapeo”, but, what is “tapeo”? If the Royal Academy of Language (RAE) had to define it, they would probably say that it is the action of “tapear” or having some “tapas”. But, what is a “tapa”? This concept is much more extended in the national territory. We can define a “tapa” as a snack that accompanies the drink we have in any bar.

Although there are distinguished references to the fact of having a little piece of food with some drink before the main meals: Cervantes talks in Don Quixote about “llamativos” and Quevedo about “aviso” or “avisillo”, there is no doubt when considering “tapeo” as a typical Andalusian product that was generalized in the middle of the XIXth century and, since then, it was being extended over all the Spanish geography. 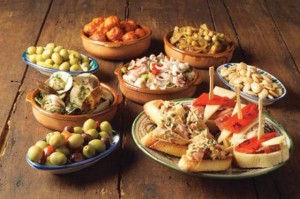 In some sense, it can be considered that the “tapa” was only a sort of security measure, because for some people, primitive “tapas” were just slices of cold meat or a ham slice to cover a cup of wine or the glass of manzanilla, avoiding the falling of any fly. However, according to others, the “tapa” was useful to cover the hole left by the wine in the stomach. Nowadays, “tapa” has evolved, from the simplest (the accompaniment of any drink with a simple “tapa”, such as olives, cold meat, etc) to a true Olympic gastronomic game, with menus of “tapas” that could be the envy of many restaurants.

Nevertheless, “tapeo” is something more than the Hispanic answer to the “fast-food” imposed by the contemporary rhythm of life in cities and to the trend imported from Anglo-Saxon areas. Going for some “tapas” shows a way of life. Eating “tapas” represents to share an open space, the bar, in which a nudge is answered with a smile, where improvised debates are established and people can join and leave them, sometimes without having any relation with the original group.

Maybe is because of this that the “tapeo” is born and developed in places with extroverted people, welcoming and friendly, as in Andalusia, Basque Country, Navarre, La Rioja, Valencia, Murcia, and, somehow, Galicia, where young and less young people go frequently to have “copas, chiquitos, vinos, tazas, etc” in well-established routes. 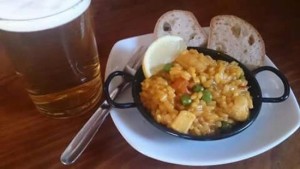 A case aside is Barcelona, a city in which “tapeo” never existed. It is true that, on Sundays, it was very frequent for a family to have an snack “fer el vermut” at the bar, but there was no tradition of “copeo y tapeo”. Maybe this is the reason why there weren’t many establishments devoted to that activity, apart from some scattered bars, property of Galician or Andalusian people, in which the ambiences of those lands were recreated. All that has changes and, in the present moment, Barcelona presents one of the biggest offers for “tapeo” in Spain. In the last three years, some establishments that please the senses of the inhabitants of Barcelona and the visitors of this cosmopolitan city have appeared.