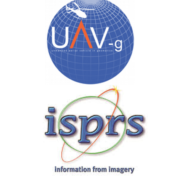 Traditional manned airborne surveys are usually expensive and the resolution of the acquired images is often limited. The main advantage of Unmanned Aerial Vehicle (UAV) system acting as a photogrammetric sensor platform over more traditional manned airborne system is the high flexibility that allows image acquisition from unconventional viewpoints, the low cost in comparison with classical aerial photogrammetry and the high resolution images obtained. Nowadays there is a necessity for surveying small areas and in these cases, it is not economical the use of normal large format aerial or metric cameras to acquire aerial photos, therefore, the use of UAV platforms can be very suitable. Also the large availability of digital cameras has strongly enhanced the capabilities of UAVs. The use of digital non metric cameras together with the UAV could be used for multiple applications such as aerial surveys, GIS, wildfire mapping, stability of landslides, crop monitoring, etc. The aim of this work was to develop a low cost and accurate methodology in the production of orthophotos and Digital Elevation Models (DEM). The study was conducted in the province of Almeria, south of Spain. The photogrammetric flight had an altitude of 50 m over ground, covering an area of 5.000 m2 approximately. The UAV used in this work was the md4-200, which is an electronic battery powered quadrocopter UAV developed by Microdrones GmbH, Germany. It had on-board a Pextax Optio A40 digital non metric camera with 12 Megapixels. It features a 3x optical zoom lens with a focal range covering angles of view equivalent to those of 37-111 mm lens in 35 mm format. The quadrocopter can be programmed to follow a route defined by several waypoints and actions and it has the ability for vertical take off and landing. Proper flight geometry during image acquisition is essential in order to minimize the number of photographs, avoid areas without a good coverage and make the overlaps homogeneous. The flight planning was done using the MdCockpit software, with the module waypoint editor. Flight route file was downloaded into the quadrocopter autonomous chip via cable. A total of twelve vertical images with a longitudinal and transversal overlapping of 60 % and 50 % respectively were taken. The digital camera was previously geometrically calibrated. Field control points covering the whole studied area were defined over the area of interest and their coordinates were measured by a GPS. Natural targets were used as field control points. The close range photogrammetric software Photomodeler Scanner v.7 was used in this work to calibrate the camera and to carry out the photogrammetric process. The software Golden Surfer was used to produce the DEM. The planimetric and the altimetric root mean square error (RMSE) were calculated in order to check the accuracy of the products. The RMSEx was 6 cm, the RMSEy was 4 cm and the RMSEy was 7 cm. Our preliminary results demonstrate the feasibility and accuracy of orthophotos and DEMs obtained from images captured from a quadrocopter using low cost photogrammetric software. A future work can be the comparison of the products obtained following the route used in this study where the images are taken vertically with the products obtained with an orbital route where the number of images will be diminished and the photos will be taken oblique.