The volume and spatial distribution of the water available for cultivated plant roots largely depends on the soil surface relief. In traditional irrigation systems, soil micro-relief plays an important part in distributing the surface drainage produced by rainfall or irrigation. In this paper, an algorithm is proposed for estimating the water distribution network on a soil surface. It has been applied to plots of around 3 m2, and the digital elevation model (DEM) has been obtained in three surface morphologies.

With each of these DEMs, a flow directions map was calculated, a hydrodynamic classification was made, vortices were detected and eliminated, a drainage network was traced, and surface flow accumulation, maximum depression storage (MDS) and the soil surface roughness index were calculated. All of these processes were carried out using a programme specifically designed for this study, called REDES©. The method designed makes it possible to establish the influence of soil morphology on surface drainage by means of a complete characterisation of the soil and its visual comparison with soil morphologies. With respect to the drainage network, the maximum convergence level appeared in gully morphology, with 306 flow paths in the rill pixel located in the lower position. Convergence levels in the others two morphologies, tilled soil and non-tilled soil, are similar and close to half of the convergence of gully morphology. The biggest contributing basin was in gully morphology, about 1440 cm2, followed by non-tilled soil, with 470 cm2, and by tilled soil, with 260 cm2.

A study of the relationship between the DEM resolution and precision to estimate the MDS is included. When the pixel size became 24 times larger than the ‘true model’, the standard deviation of unitary vectors (SDUV) increased between 2 and 9%. Introducing this relationship, a simple predictive model to find out the estimation error of the MDS has been adjusted. The input variables used were soil roughness and DEM resolution. 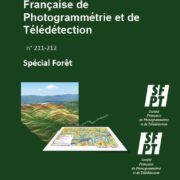 The new very high space resolution satellite images, such as QuickBird and IKONOS, open new possibilities in cartographic applications. This work has as its main aim the assessment of different sensor models for achieving the best geometric accuracy in orthorectified imagery products obtained from IKONOS Geo Ortho Kit Imagery. Two dimensional Root Mean Square Error (RMSE2D) is computed and utilized as accuracy indicator. The ancillary data were generated by high accuracy methods: (1) Check (ICPs) and control points (GCPs) were measured with a differential global positioning system (DGPS) and, (2) a digital elevation model (DEM) with grid spacing of 5 m derived from digitized contour lines with an interval of 10 m and extracted from the 1:10,000 Andalusia Topographic Maps series (RMSEz<1.75 m), was used for image orthorectification process. Four sensor models were used to correct the satellite data: (1) First order 3D rational functions without vendor image support data (RFM1), (2) 3D rational functions refined by the user with zero order polynomial adjustment (RPC0), (3) 3D rational functions refined by the user with first order polynomial adjustment (RPC1), and (4) the 3D Toutin physical model (CCRS). The number of control points per orthorectified imagery (9 and 18 GCPs) and their distribution (random and stratified random sampling) were studied as well. The best results, both in the phase of sensor orientation (RMSEO about 0.59 m) as in the final orthoimages (RMSEORTHO about 1.25 m), were obtained when the model RPC0 was used. Neither a large number of GCPs (more than nine) nor a better distribution (stratified random sampling) improved the results obtained from RPC0.

In this work, a theoretical-empirical model has been developed for the modelling of the local geometric accuracy of digital orthoimages from panchromatic QuickBird Very High Resolution Satellite Imagery (VHRSI). The empirical component integrates the error of sensor orientation and its propagation to the orthoimage generation process. The theoretical component, mainly a geometrical study from QuickBird Image Metadata File, seeks to model the propagation of DEM error throughout the orthorectificacion process in addition to the previous errors of the bundle adjustment. For the goal of model developing and calibration, a panchromatic QuickBird Basic Imagery was acquired on 19 December 2004, registering a mean collected GSD of 0.62 m, off-nadir view angle of 8.4º and an azimuth and elevation angle of the satellite with respect to the centre of the image of 123.3º and 80.9º respectively. The QuickBird image employed covered an area of 17 x 18 Km over the district of Níjar, located at the North-East of Almería city, Spain. It was centred on the UTM coordinates European Datum ED50 (easting and northing) of 577,848 and 4,087,277 m. The Toutin’s 3D physical model was the selected method to compute the bundle adjustment and so to carry out the sensor orientation using PCI Geomatica OrthoEngine software v. 9.1.7. On this score, 3D coordinates of 124 ground points were measured by means of high precision differential GPS techniques. From the whole set of ground points, a sub-set of 45 ones uniformly distributed was selected for the sensor orientation (GCPs), whereas the remaining 79 were used as independent check points (ICPs) to assess the performance of the developed model regarding to the average error of the final orthoimages. Inasmuch to the results, the empirical component, which takes into account the effect of pointing error and number and accuracy of GCPs on sensor orientation, presented an acceptable fitting to the experimental data, with a regression coefficient R2 = 0.932. The theoretical component also offered good results, observing like the proposed model reproduces with reasonable accuracy the statistical behaviour of the 2D orthoimage errors measured at the 79 ground points checked. The findings obtained in this work could be used as a guide for the selection of appropriate operational parameters in projects related to digital cartography production and updating from QuickBird imagery.