This is about the struggle for life. Artist Report from the Modern Illusions Exhibition

This is an artist report filed by one of the collaborators behind the exhibition Modern Illusions: A Visual Diagnosis that closed recently in the Lafutura gallery. It breaks the taboo on artists reflecting directly and impersonally on their own work. I will start by unpacking the formal structure of the works, show how the installation turned into an event and close with an evaluation of the exhibition as a lived experience. 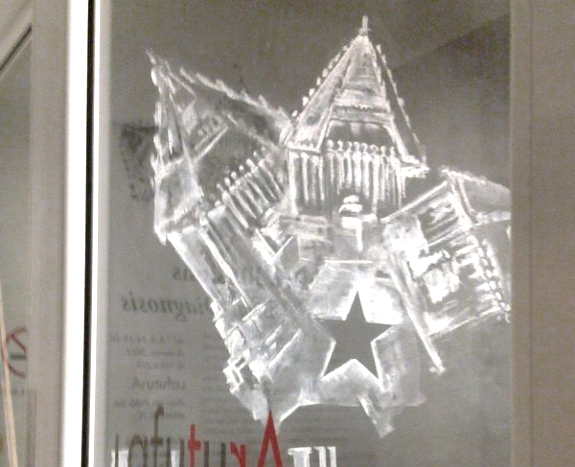 Through the gallery door, The exhibition was built around the short film The shell is made of steel by Pedro Jacobetty (with a soundtrack from oto), a montage of archival footage from the Internet Archive. The film addresses the contradictions of modernity – the creeping alienation which is the unadvertised part of the progress package, the loss of control which comes with complex technology and the reverberating, melancholic ruminations of reflexivity. The twentieth century came with the realisation that greater progress does not necessarily mean a better life. 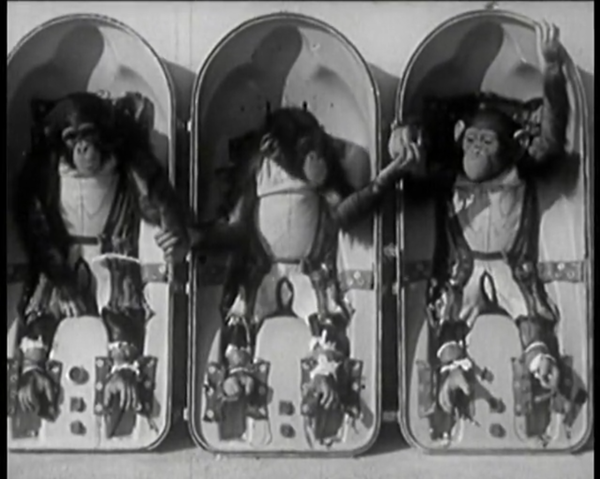 On the exhibition poster these ideas were distilled into the sociological trope of the Juggernaut, an enormous Hindu ceremonial truck pulled forward by numerous devotees. Once it acquired momentum, the Juggernaut becomes dangerously unsteerable, prone to crush its devotees under its dreadful weights – a fitting image of technological modernity out of control. The visual and textual elements of the exhibition were clustered around the metaphor of the Juggernaut which is at once abstract and concrete. 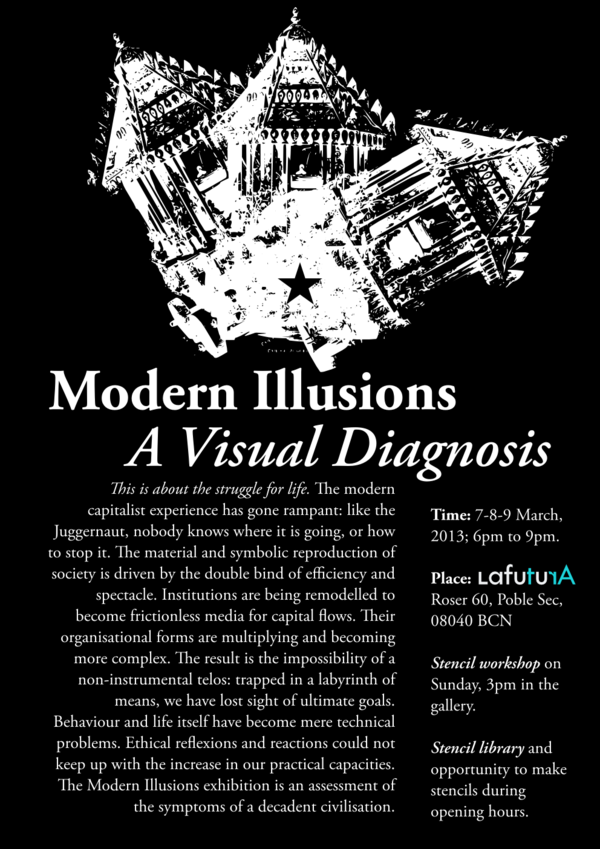 Apart from the video projection, the rest of the space was taken up by black and white posters, thus employing a simple, uniform and popular format. This format combined four elements: (1) a strong visual motive ripped off the Barcelona skyline or the aforementioned short film, (2) a leading concept spelled out in disproportionately large letters, (3) scraps of dry factual information, (4) sentences of delusional propaganda. The first two elements were combined visually into an abstract/concrete pair and the last two elements were combined typographically into an objective/subjective. That’s how the letters D-I-S-E-A-S-E could mount the top of Torre Agbar as a neon advertisement, combined with official reports of occupational incidents and Tiqqun’s screeching political critique of the ubiquitous liberal mindset. The LED lights covering the surface of the building make it the most visible element of the Barcelona skyline – high-tech animations communicating the creative city concept –, while perhaps the same technology creates the static electricity making the workers inside, below the shiny surface, chronically sick. 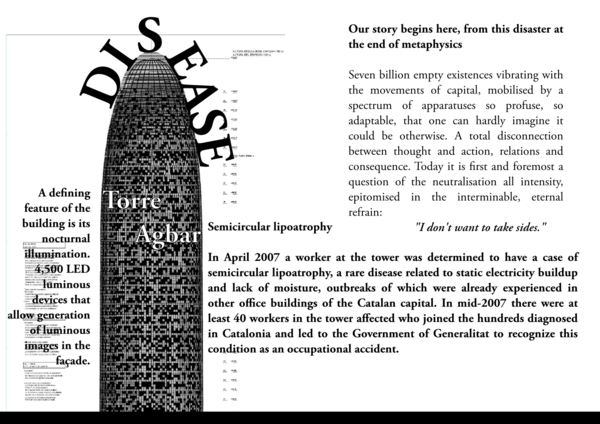 The political slogans destined to answer such conditions – “Create territories! / Multiply zones of opacity! / Become the territory!” – served as the clue for arranging the posters on the wall. Multiple copies in multiple sizes were scattered along the walls covered by newspapers. Spanish and English language versions mixed irreverently. Territories have been created. Finally, colour broke out on the monochrome surface and spray painted stencils started to form a new layer of articulation on the top of the posters. Zones of opacity have multiplied. From here, – the moment of the opening – the exhibition took a performative turn and the gallerists, the audiences and the artists alike kept producing new stencils. Workshops and sessions filled the space and on some evenings the whole space was a big mess, complete with cutting knives, alcohol, and clouds of spraypaint. We became the territory. 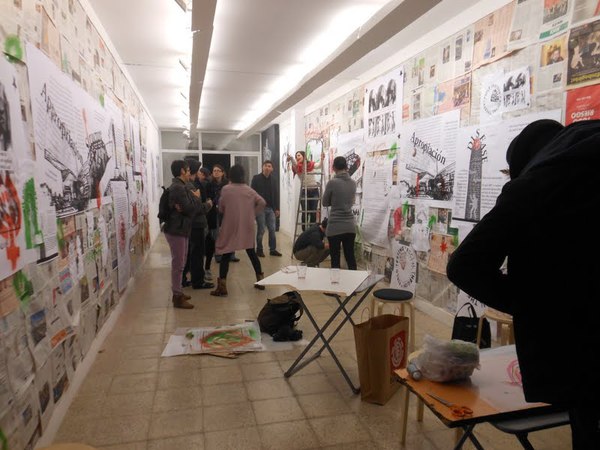 Turning the sombre ideas of runaway modernity, technological rationality and creeping alienation upside down, we attempted to create counter-experiences. The exhibition denied elements of modern art such as attribution, intellectual property and the isolation of artistic products from their environment in the context of a white cube. The stencil workshops turned out to be empowering encounters with a technology, playful and spontaneous. In the best moments we managed to use the medium of the exhibition for building a friendship between the artists and a relationship with friends and associates who came to see it. Sometimes we were carried away with the Juggernaut of modernity, but instead of progress, rationalisation and alienation, play, festivity and association overwhelmed us. Finally, the situation was an opportunity to negotiate political affinities and horizons through the dialogue of senses and bodies.