Saltar al contenido
Almería is a city in Andalusia, Spain, on the Mediterranean Sea.  It is the capital of the province of the same name.  It has a Subtropical arid climate as annual precipitation is below 200mm; it is the only major European city with this type of climate. The average annual temperature is above 19 °C (66 °F). Almería has hot summers and warm winters; it has one of the sunniest, warmest and driest climates in Europe.
The New York Times defines Almeria’s beaches as the most beautiful ones in Europe.  The ideal beach is one that you come upon after a hilly, rocky hike over scrub-covered hills. It’s a half-moon cove of ashen sand flanked at either end by rock formations that look like giant Impressionistic sand castles. Instead of palms, occasional yellow and purple wildflowers dot the nearby hills…
Don’t miss in Almería city

Its Moorish castle, the Alcazaba of Almería, is the second largest among the Muslim fortresses of Andalusia, after the Alhambra and the biggest of the citadels built by the Arabs in Spain.  The Alcazaba of Almería can be seen from any part of the city. Its construction was begun in 955 by Abderramán III and finished by Hayrán, «taifa» king of Almeria, in the XI century. After the Christian conquest it was reformed by the Catholic Monarchs and Carlos I. Schedule (From June 16 to September 15): From Tuesday to Saturday from 9 am. to 3 pm. and it will open for activities from 7 pm.  to 10 pm. Sundays and bank holidays from 9 am. to 3 pm. Duration: 1.5 hours. (Free entrance)

Unique example of its kind, as it is a 17th century cathedral-fortress, in Gothic style with Renaissance façades, built for praying and also to defend the city against Berber pirate attacks. Duration: 40 min. Schedule: From Monday to Saturday from 10 am. to 7 pm. Sunday from 1:30 to 7 pm. Visiting days: 5 €

Raid shelters: Almería suffered up to 52 bombings from air and sea, with a total of 754 bombs dropped during the Spanish Civil War. This led to the decision to create a system of underground shelters for the protection of, approximately, 40,000 civilians. These shelters measure more than 4.5 km long, and they are equipped with a surgery room and a food storage room. They were designed by the local architect Guillermo Langle Rubio, being today the most important and better preserved shelters in all Europe. Schedule: Closed Monday. Tuesday to Sunday from 10:00 to 13:30 and from 18:00 to 21:00. Guided visits: 10:00, 11:30, 12:30, 18:00 y 19:30 h . Buy tickets. Price: 3-5 € 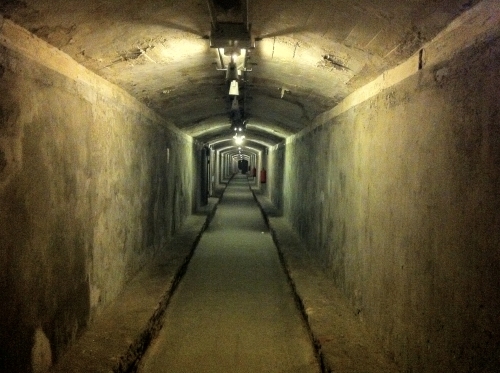 The Natural Park of Cabo de Gata offers visitors marvellous beaches with a volcanic, moonlike  environment. A great diversity of flora and fauna marina attract diver  enthusiasts from all over Europe. The 175-square-mile park commonly known as Cabo de Gata is Europe’s most arid region, according to Unesco, which has named it a Biosphere Reserve.

The Tabernas Desert is one of Spain’s semi-deserts, located within Spain’s southeastern province of Almería. It is located in the interior, about 30 kilometers (19 mi) north of the provincial capital, Almería, in the Tabernas municipality. It is protected as a wilderness area (paraje natural) spanning 280 square kilometres (110 square miles).

Climate
Almería enjoys year-round sunshine with an average annual temperature of 20ºC (68ºF). Summers are pretty warm (32ºC max – 24ºC min) and humid due to its Mediterranean location; however it cools by night.

The official language in Almería is Spanish. You will find that most people are not fluent in English, except hotel staff, but they will do their best to communicate with you.

Shopping
There is a good range of shops in the city centre and also big suburban shopping centres. Shops are generally open from 10:00 to 14:00 and from 17:00 to 20:30, Mondays to Saturdays. Department stores and shopping centres stay open during lunch time and close around 21:00 to 22:00.

Eating
Spanish eating habits are characterised by late hours, we normally have lunch around 14:00 and dinner around 22:00. Most restaurants open from 14:00 to 16:00 for lunch and from 21:00 to 23:00 for dinner. However some tourist and informal places have longer opening hours.