The global layout of the system includes: 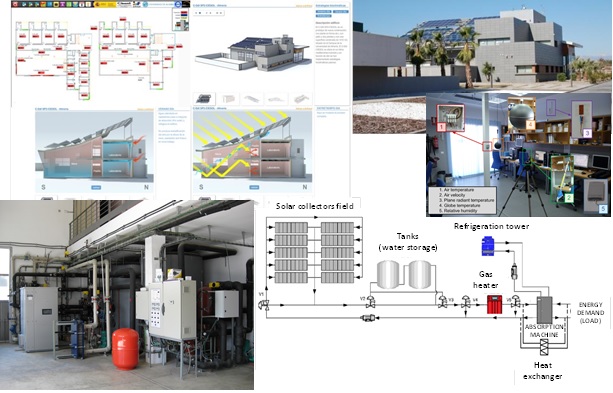 The Solar Energy Research Center (CIESOL) is a joint research establishment, founded and managed according to an agreement signed in April 2005 between the University of Almeria and the Centre for Energy, Environment and Technology (CIEMAT) at the Ministry of Economy and Competitiveness. The center is located on the northern side of the University of Almería campus, in a single-store building, and has been operating since January 2006.

CIESOL is a bioclimatic building where active control of inside comfort can be carried out by means of a solar cooling and heating system, automated windows and blinds. More than 300 sensors are installed to allow estimation of inside variables and comfort control. The roof of the building is composed by both PV cells (for producing electricity for lighting and other uses of the building) and solar collectors (for producing process heat). The solar cooling system consists in a field of solar flat collectors which supply hot water to an absorption machine generating chilled water for air conditioning. 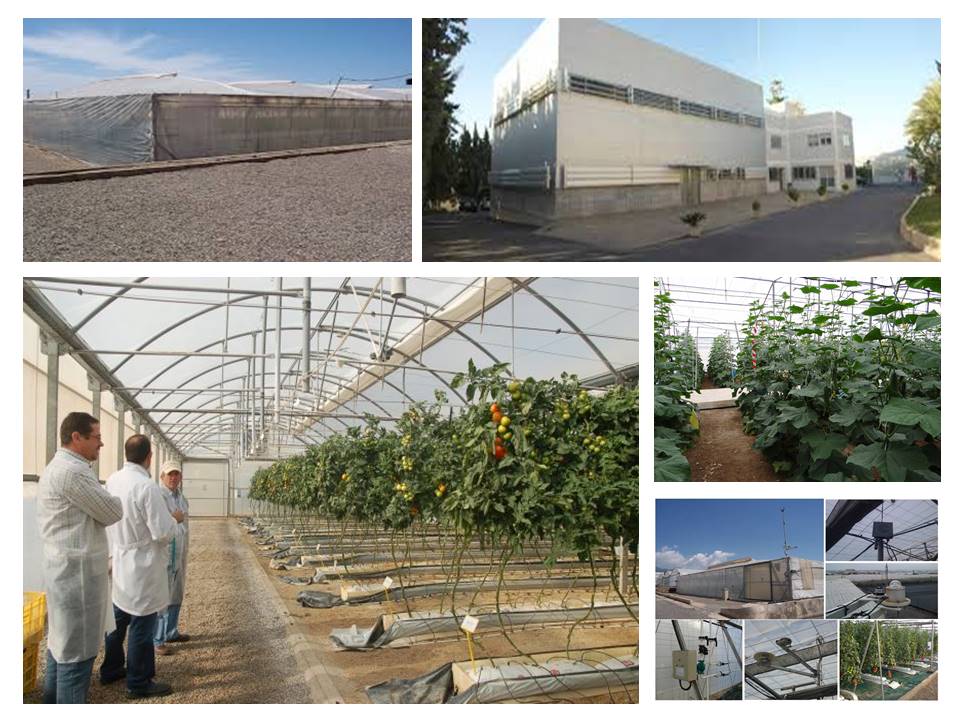 The greenhouse is located in the Experimental Station of Cajamar Foundation, in El Ejido, in the province of Almeria. Is “Parral” type greenhouse (877 m2 total soil surface).

The control actuators installed are automated ventilation  with lateral windows in the northern and southern and rolling lateral continuous ventilators. For heating purposes a petrol heater is used as well as aerial tubes with hot water that can come from a conventional boiler, a biomass boiler or from a solar collector. A complete fertigation system has been installed.

Climatic parameters are continuously monitored within the greenhouse. Outside the greenhouse, a meteorological station was installed, in which air temperature, relative humidity, solar and photosynthetic active radiation (PAR), rain detector, wind direction, and velocity measurements were taken.

The electric vehicle of the Universidad de Almería (eCARM) consists of an urban electric car that has been adapted for automated control. The prototype features a 48 volt DC-motor and 8 gel-batteries. Its batteries system ensures autonomy of 90 km at a maximum travel speed of about 45 km/h. In its current form, the prototype features full manual control and semi-autonomous mode (only autonomous  thrust control is fully implemented). It has two embedded computers. Regarding power consumption, basic sensors are installed. 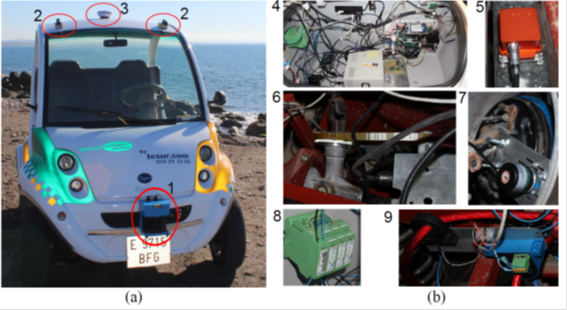 The eCARM can be considered as a good test-bed for the study of a hierarchical predictive control as it involves i) Different time scales: integration of typical process of ms inherent to the communications with sensors and actuators and also to the variables related to models of demand of mobility or load which need of wider scales of time. ii) Constraints: The battery capacity, the acceleration required, or the priority of the use for mobility needed. iii) Predictions: forecasting methods for the prediction of the renewable generation, for the load or the prediction of mobility patterns. 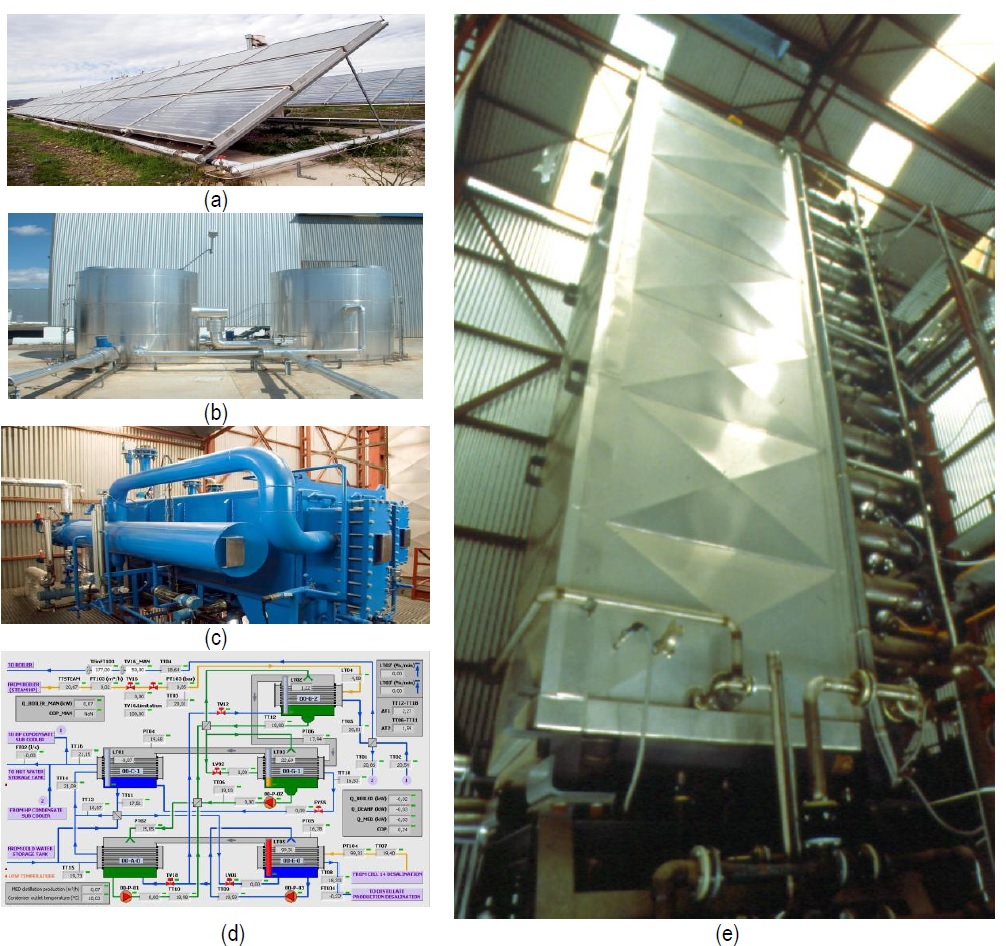 The solar desalination plant AQUASOL is located in the Plataforma Solar de Almería (PSA), a dependency of the CIEMAT. The PSA is the largest concentrating solar technology research, development and test center in Europe.

The AQUASOL system basically consists of a CPC solar collector field, two water storage tanks, a multi-effect distillation plant (MED) and a double effect absorption heat pump (DEAHP) coupled to a gas boiler. The MED plant consists of 14 effects at decreasing temperatures from cell 1 to 14 and. Seawater is pumped to the first cell where first evaporation is produced at the same time that the rest of seawater goes to the following cells by gravity. To get the first seawater evaporation, in the first cell there is a heat exchanger working with water from primary tank. Specifically, for the optimal MED operation, it is necessary an inlet heat exchanger water temperature of 66.5ºC.

This temperature is possible to reach with heat from the solar field and also with the absorption heat pump. Energy supplied by the collectors and DEAHP is transferred to the primary tank using water as the heat transfer fluid. To reduce the overall fossil energy expenditure, the low-pressure steam from the last cell is used in the DEAHP, which decreases consumption from 200 kW to 90 kW. The AQUASOL plant can operate in three modes; solar, fossil and hybrid.