Christopher Day “The Lives of Teachers: Challenges to Sustaining a Passion for Quality”

During the last twenty years, he has led and continues to lead national, European and international research and development projects in the areas of teachers’ work and lives and school leadership in Europe, North and South America, China and Australasia, focused on topics such as: variations in teachers’ work, lives and effectiveness, successful principals in schools in challenging urban contexts; the impact of leadership in improving and effective schools on pupil outcomes, teacher resilience.

In recognition of his work internationally in the field of continuing professional development for teachers, he was awarded an Honorary Doctorate from the University of Linkoping, Sweden, in 1993 and, in 2010, the Michael Huberman Award for Excellence in Research on Teachers by the American Educational Research Association. In 2009, he was awarded a D.Litt by the University of Nottingham and in 2012 he was elected as an Academician to the Academy of Social Sciences. 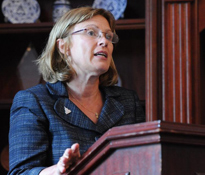 Professor of Educational and Psychological Studies in the University of Miami (USA). She is also director of Community Well-Being Ph.D. Program (CWB) of this university. Between 1991 and 2014 she has worked at: National Institute of Mental Health and Substance Abuse and Mental Health Services Administration (U.S. Public Health Service); Georgetown University; and University of Illinois at Chicago.

She has conducted and directed studies and research projects focused on the process of acculturation and adjustment of immigrants and refugees, and community-based interventions designed to improve their mental health and well-being. Based on studies conducted in Maryland, Chicago, and New Jersey, she has published on school and psychological adjustment of refugee adolescents, the role of parental involvement, differences in acculturation between adolescents and their parents, and effectiveness of community and school-based mental health interventions.